This is Anya Trukhina. Her story is unique and inspiring, one that will touch us all. She was baptized on November 28, 1994 in Moscow. It took two long years before she made this life-changing decision, one that was filled with peril and strife but God always wins! Being deaf, you face many more challenges that are incomprehensible to the average person. Fear is what Anya lived in, day in and day out. Acceptance is what she was ultimately seeking, but Satan was fighting to keep her away from the church, because church is the only place she would find acceptance. After turning down many invites, she ultimately decided to dive in and give the ICOC a try.

Despite visiting the ICOC, she was faced with many hurdles. Growing up in an Orthodox church, she was uninspired, and always wanted something more. Many fears surrounded her as she stepped out into the unfamiliar territory. “Would they accept me even though I am deaf?”, “How am I supposed to leave my family tradition?”, “Is this the right church for me?”. Thankfully Anya turned to God through prayer through these difficult questions, and all her prayers were answered! The Moscow church accepted her and loved her, and there she felt the spirit of God moving. At 19 years old she was baptized, and she found a loving church home.

After 2 years she was to lead the group of deaf women and she was a deaf friend in the Church. Being in the deaf ministry, she had big dreams. Sometimes our dreams do not coincide with God’s plan, and our reaction to this can make all the difference in the world. Anya dreamt of marrying a man she worked with in the deaf ministry, but after he fell away, she struggled deeply in her walk with God. Her hopes had shifted away from God, and were placed upon a man, and her own fantasies of what she wanted to do in the church. Since her focus was away from God, her joy left, and the call to make disciples were hardened.

Through all this difficulty, Anya still wanted to do the right thing and follow God, and found someone to study the Bible with. While this rekindled her excitement for God for a short while, her foundation was not strongly rooted in God. This created a disaster when a struggle arose. She wanted to be baptized, but… something incredible happened… she got cut off from the Church in 2003. Anya didn’t understand the meaning of being “cut off” from the Church. And the girl was in shock that she was cut off and still not baptized. Anya became angry with people at the Church! She tried to go back a year later, in 2004, but she could not let go of her resentment and decided to not go back. She tried to forget about the Church.

Eventually, Anya began to look security in other avenues. She married a musician, who didn’t believe in God, and began to work at a modeling agency. She was looking for inspiration at the agency, but it was not all that. She felt terrible! The employees there laughed at Anya because she was too modest, she always prayed behind the scenes, and told them about God. All the while she felt she was being called Jesus to preserve her ecclesiastical training.  Anya understood that being a model is not for her, departed the agency in 2007, and began to look for a Church.

She found many good churches, but they were not all that she expected. Her husband did not understand why Anya needed a Church. He said that his family and arranged for her to work as a designer to design business cards and booklets for music clubs. She began to settle down in one of the Orthodox Churches and worked as a volunteer to help children without parents. Anya went there, because she had a heart for these children, but she didn’t understand why these healthy children were not being adopted. Anya was looking for answers from God, and she prayed. She also began to doubt her husband, and perhaps God would show her that he is not for her…” I don’t know the will of God” – she thought.

Anya began thinking about the Church of Christ, in which it was before, she missed the church, but still remembered the offenses made at her. Anya realized that they should forgive those who hurt her. She prayed for mercy, it was difficult to forgive, and she struggled with this sin! One day Anya prayed in her room, to forgive all. She sobbed hard and then felt relieved in mind. Sometime later, in a social network she met friends from the Church of Christ by accident. Anya was excited about this; it was as if they were her long lost relatives! They wrote a few words to Anya, and she was happy to see what the Church was like after 9 years. The disciple she was in contact with invited Anya to a meeting in December 2011. Anya’s husband came with her to the Church even though he didn’t understand. He did not understand why Anya was so happy in the Church. They began to go in different directions. They understood that they were not made for each other; they were different in everything and had different interests. They never had children because they practically did not live together. Unbeknownst to them, they gradually went away from each other. Even though she loved him, Anya gradually had disappeared from him, and he let her go. They finally divorced and she began to live from scratch. But the good relations they have stayed. Now she prayed for him, to know God and come to Him. Anya was very glad to be with the disciples of Christ again and she felt happy. Her dream to be baptized came true and the dead Princess was baptized by her friend Veronica. Anya was grateful to God that He brought her to Him and helped her through her trials and mostly her ability to forgive all! And it works! When all forgive, then God forgives you – life changed for the better, from malice to a purified soul! And through forgiveness all will be saved! Amen! This may be a lot of writing, but it’s from the heart! I believe that with God all things are possible. Anya realized her sin, she had no soul and had to be like Christ to forgive her enemies. Anya’s favorite bible verse is 1 John 4:11-12 “Friends of the beloved! If God so loved us, we ought also to love one another. No one has ever seen God, but if we love one another, God lives in us, and His love in us reach perfection.” But with God and prayer Anya have repented. Forgive me, brothers and sisters! I love you very much! I’m in Church, because I want to serve God! 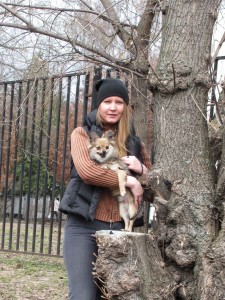