Hello Brothers and Sisters! My name is Michelle McWilliams. I’m 23 and I live in a western suburb of Chicago. I did undergrad at Elmhurst College, where I studied Speech-Language Pathology and minored in music. I was involved with many choirs and theater productions in college. During my senior year at Elmhurst I took a course in ASL and really loved it! I decided to pursue ASL interpreting instead of grad school for Speech Pathology. Currently I am in my second semester at Harper College studying ASL. I will apply for the interpreting program next semester. I don’t know yet where God will lead me with this, but I would love just to be able to interpret worship services someday!

I have been a disciple since June 18th 2009. I grew up in a Non-denominational/ evangelical church. I was very blessed that this upbringing gave me a hunger for God and His Word. In College at Elmhurst I was involved with Campus Crusade for Christ and attended several Bible studies. I met a disciple named Josh during a production of Shakespeare’s a “Mid Summer Night’s Dream” we were both in the cast. I found out he went to a “Bible Talk” and, since I loved the Bible, I decided to check it out. I eventually studied the Bible and got baptized. It was hard at first to understanding my former doctrine wasn’t in line with the scriptures, but I really clung to God’s word and knew that I had to follow no matter what. Josh and I are now dating! He is not studying ASL but I’ve taught him a few things and he has picked up a lot about classifiers.

1st and 2nd Peter are two of my favorite books in the Bible; I love the power and clarity they give. One of my favorite scriptures is 2 Peter 3:9 ” The Lord is not slow in keeping his promise, as some understand slowness. Instead he is patient with you, not wanting anyone to perish, but everyone to come to repentance.” 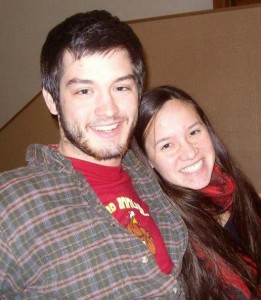