Carole Cepeda was born in Durban, South Africa. She was born deaf, raised to use hearing aids, and lipreading skills. She first heard about communion service when she was a teenager at Boston Church of Christ and didn’t understand purpose of that message. The next day, Carole thought about the communion and she spoke to her Father how she felt the need to get baptized now. Her father told her that she first need to study the bible. Her parents studied the bible with her. The reason Carole made a decision to become a disciple was that she needed a relationship with God and realized that she was not a true Christian. Carole was a teenager when she was baptized at the Boston Church of Christ on August 12, 1985. Her families are disciples. She has been a disciple for over 25 years. Carole went through difficult times when she was the only deaf disciple and without interpreters at South Africa & Oakville Church of Christ. She learned to persevere and stay faithful. She learned reading English Version for the Deaf bible daily. Carole helped alot of deaf disciples, who ask her for advice to overcome their struggles. Her strong characters are soft heart and gentle personality.

Carole decided to move from South Africa to Los Angeles, USA to be partof the Deaf Ministry team in 1996 because of her spiritual needs with this ministry. She felt very excited and encouragements to be connected with the LA Deaf Ministry team. Carole felt the interpreter services at LA have helped her understand the church services very well. She lived in LA for 6 years then moved to Oakville, Canada in 2002 to live with her sister, Megan’s family for 2 ½ years.

How did Carole met Joe? She was single for 35 years. Carole first met Joe on a deaf double date on August 2002 at Los Angeles, CA when Joe took his first trip vacation to LA. Two years later in July 2004, they developed their special friendships by communicating long distance to each other by emails and MSN Messengers weekly. They had great time for praying and sang church songs during MSN Messengers. On August 2004, Carole flew to San Antonio for a week to attend TX Evengelism Seminar that had interpreter services. Carole went on 2nd date with Joe. They spend time each other daily. One month later, they flew to Los Angeles to attend Deaf Retreat and went on their 3rd date. On December 13, 2004 Joe paid half of the Carole’s ticket to visit San Antonio for a week as an early Christmas gift to Carole. That day he asked her to be his girlfriend at the airport lugguage area. Carole stated yes and excited for their dating relationship. Joe gave Carole a heart necklace and red rose. They went on their triple dates dinner at Zios Italian Restaurant. They had much in common by deafness, fluentin sign language, and Deaf Ministry experiences. They have been dating four months. Their long distance relationships was challenge because they were not able to see each other often. Carole visited San Antonio again to spend time with Joe during Spring Breaks for two weeks in March 2005. Joe flew to Oakville, Canada for three days weekends to spend time with Carole and her family. He asked Carole to be engaged on Saturday, April 16th, 2005. Carole responded yes to marry Joe and felt surprised and joy for engagement gift. They had wonderful romantic time to celebrated their engagement dinner at Rain Forest Cafe at Toronto with her sister’s family.

On June 2005, Carole moved to San Antonio, TX for wedding preparation. She felt very happy because they no longer in a long distance relationship. She married Joe Cepeda on September 17th, 2005. Their wedding ceremony has two ministers and translated by voice interpreter, Houston Carruth, and American Sign Language (ASL). The two wedding ministers are Mike Taliaferro (San Antonio) & Jermaine Cornish (Los Angeles Deaf Deacon Leader). Annie-Brigitte Taliaferro performed a song called Be My Valentine by Martina McBride while Joe performed that song by ASL. Our 1st wedding Anniversary in 2006celebrated at Los Angeles, CA to attend the Deaf Retreat. They performed their communion message on Sunday morning at the retreat. Joe gave Carole a surprised anniversary gift for 1 dozen of roses after the communion message. Her future goals are to baptize deaf women and female interpreters. 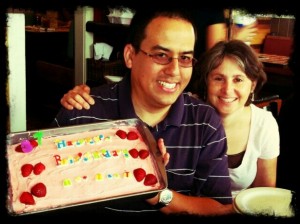